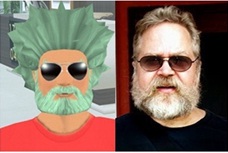 An educational technologist ever,  David devoted more than 15 years to the computer business (serving in just about every imaginable capacity, from programmer/analyst to operations director) before switching to teaching. Almost immediately after David and a third of his fellow employees were laid off in 2001, he got two university positions: teaching an online, graduate-school-level software engineering course, and designing classes for a technical writing curriculum. He's never looked back.
In 2002, David decided to add travel to his career change, moving to a university in South Korea. After streamlining his first coordinator position out of existence, he became the school’s first Technology Specialist, designing, developing and delivering the Computer Assisted Language Learning program. David moved on to the school’s International Business Department, where he taught computer and business classes to students from Korea, China, Russia, Vietnam and other countries. It was 2006 when David started taking students in-world about Second Life, because he needed a way to teach, e.g., computer programming and business management to students who were having trouble reading English textbooks. He spent another year in Korea, as a professor in a college’s computer science department, where he incorporated Second Life into almost all his IT classes, as well as other teachers’ English courses, taking over 500 learners inworld.
In 2009, David decided to again change venues, to K-12 international schools. His first job didn’t last long. He was run out of town for advocating 3D virtual world.  He escaped to Changchun American International School (CAIS, in Jilin Province, China) in the summer of that year and that’s when the 3D miracle making began in earnest. In addition to creating Virtual CAIS in Second Life, David established Caisland via an OpenSimulator private grid and a hypergridded grid in ReactionGrid. David was invited to present on 3D virtual worlds at no less than seven international educational technology conferences during 2011. As of the summer of 2012, David will be the Technology Integration Specialist (as well as the International Baccalaureate Diploma Program Information Technology in a Global Society Teacher) for Colegios Peterson (Peterson Schools) in Mexico City (http://www.peterson.edu.mx). Contact David at [email protected] if you’d like a presentation or just some help getting started with 3D. His blog is inDeeds! (http://www.indeeds.com), powered via his Scoop.It site (http://www.scoop.it/t/3d-virtual-worlds-educational-technology/).

(Picture taken April 2012 at the Panda
Base, Chengdu, China. Pandas in
the trees above are 6 months old.)

Heather is a Canadian teacher presently teaching at Yew Chung International School of Beijing. For five years she taught Year 5/Grade 4 and then transferred to Year 4/Grade 3. When she graduated from Evangel University in 1974 computers were housed in large rooms and used predominately by the finance department.